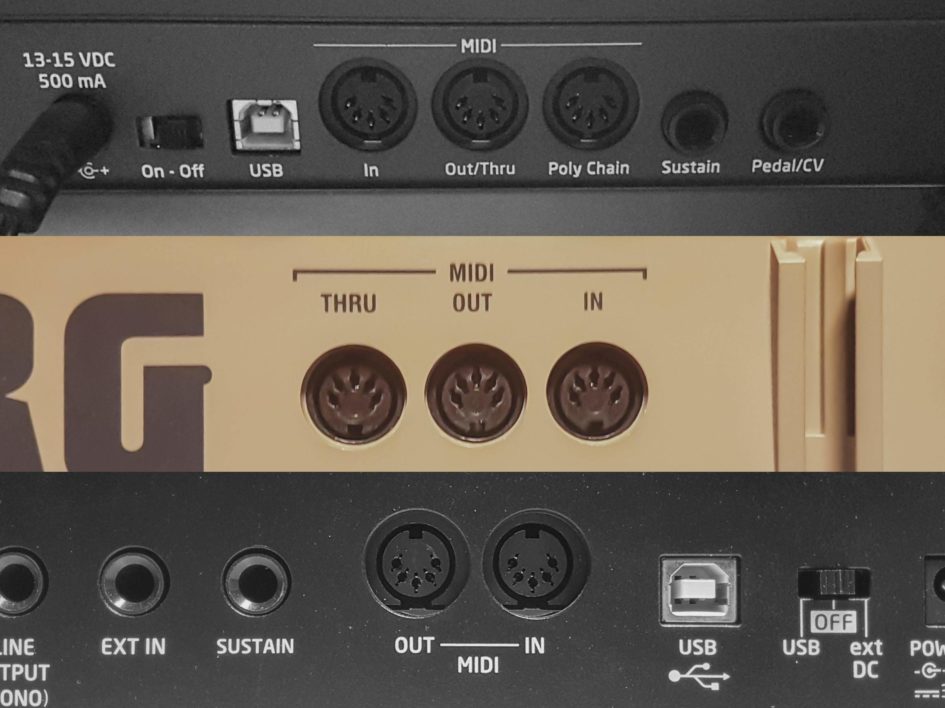 If you ask yourself a question:
“How to sync and control multiple MIDI devices?”
Simple answer is:
“Use MIDI Thru!”
Or actually:
“Make a MIDI daisy chain connecting MIDI Thru to MIDI In of consecutive devices.”
“But what if the devices are equipped with MIDI In only?”
“Use MIDI Thru box!”

Let’s start by quickly defining what is MIDI Thru: it’s an output socket that duplicates MIDI stream that came into the device thru MIDI In port. It useful when one wants to create a chain of MIDI devices working in sync.

MIDI Thru socket used to be included in most of the synthesizers from the ’90 along MIDI In and Out. Unfortunately for some users, a tendency has appeared over the last few years to minimize equipment dimensions. Changes did not spare I/O configuration. Manufacturers decided that MIDI Thru socket is not a necessity, but some gave users option to change MIDI Out into Thru using equipments internal software. An obvious disadvantage of this is that users can no longer use both Out and Thru at the same time. Second important drawback of ‘soft’ MIDI Thru is an increase of transferred MIDI latency. (Another victims of size reductions are MIDI DIN sockets themselves which are being replaced with 3.5mm jack sockets).

One of the main purposes of connecting multiple instruments via MIDI is clock synchronization. Ideally we want internal sequencer of each device to run in perfect sync with another. Any latency that happens between instruments that are daisy chained using MIDI will ruin synchronisation. Delay between the first and the last device in a chain will be the result of all delays that happened on the way. Soft MIDI Thru increases latency. Using number of instruments implementing soft MIDI Thru in a chain will most probably cause the owner to tear out his hair. A solution to such problems already exists.

What’s that buzz about?

Another issue that a user of multiple MIDI devices (usually connected via USB to a computer) can encounter is unwanted digital noise [hum, buzz etc]. This is probably a result of ground loop. Part of (DIN) MIDI standard is presence of an opto-isolator on every MIDI In. Use of electric isolation on connections between electric devices makes them less susceptible to unexpected buzzing. When you can hear a buzz – try using DIN MIDI instead of USB.

A solution to issues described above would be a dedicated device that offers multiple MIDI output sockets containing identical copies of the MIDI stream. This device is called a MIDI Thru box. We can avoid creating daisy chain, instead we ad Thru box after first device that generates clock and/or control messages and connect all remaining devices do it. This way each of the devices receives an exact copy of the MIDI stream as intended, with no unnecessary delays.

When choosing a Thru box it’s good to keep in mind few things:

Theme by Anders Noren — Up ↑